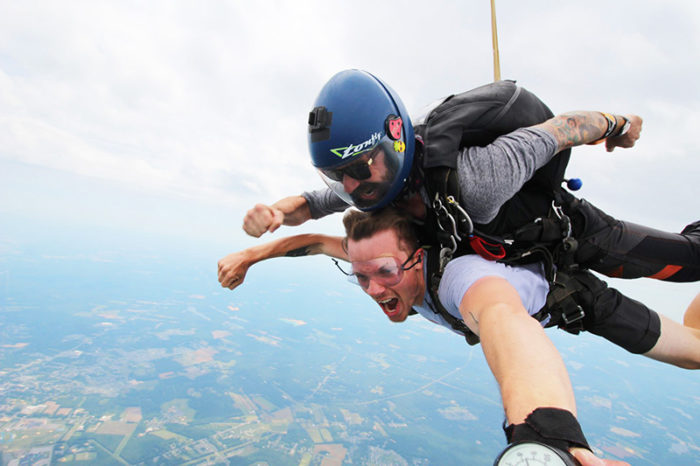 The plane crawled foot by foot up to jump altitude, thirteen-five, and for a brief second, I assured myself: “I got this.” Out the window, views of trees, cars, and clouds shrinking beneath me were quite soothing. Then the jumper at the back of the plane thrust the door open and gale-force winds barreled through the cabin, sucking out whatever confidence I brought with me from sea level. I could only imagine– hell, I could only hope– that the few other tandem students about to jump with their instructors were also second-guessing themselves: “Do I got this?” For most newbies, like me, the scariest moment is when the safeguard between you and gravity, the door, goes away, and the security of being tethered to a skydiving master with ten thousand jumps on their shoulders seems to not exist in the way it did on solid ground.

Nevertheless, I faced tandem number three (or “T3”) with even more enthusiasm than I did with one and two. Besides, my objectives were nearly identical to those of T2: exit, stabilize, three practice touches (on the pilot chute, which deploys the main parachute), maintain heading, execute smooth turns, pull at fifty-five-hundred feet, and do some basic parachute steering. This should be a piece of cake, one step closer to my skydiving license. Now, let’s begin.

Gear up. Harness? Altimeter? Got ‘em. Review objectives: exit, touches, turns, pull, steer. Easy. Board plane. Wait.. plane’s not here yet. Wait for the plane, and Ben, while you’re at it, cool your nerves. 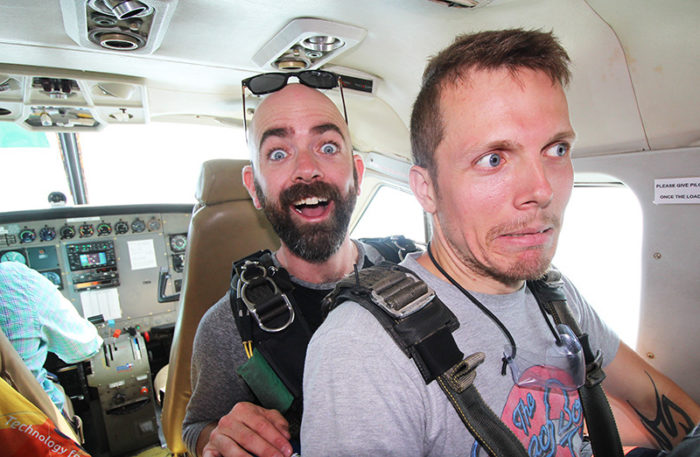 My instructor and I creeped up to the open door and jumped.

My exit was good and after a few seconds of tumbling, I was stable. I checked my altimeter, chose a landmark on the horizon as my heading, and got the thumbs up from my instructor to begin the maneuvers. Three practice touches and three smooth turns later, it was almost time to pull. Six thousand feet, my altimeter read. Fifty-five hundred: pull o’ clock. I waved twice as a signal to my instructor, reached for the pilot chute, and pulled.

I knew what happens next. After pulling, it takes a few seconds for the main parachute to deploy, allowing for a comfortable, soft deceleration.

THIS time, however, when I pulled… nothing happened.

Was it stuck? Did I grab the wrong thing? Did I not pull hard enough? Maybe it did deploy and I just haven’t felt it yet. As Rick taught me in ground school, give the parachute five seconds. If nothing has happened past five seconds, you know something is wrong. I waited five seconds. Whether it was to give the parachute a chance to deploy or to suppress my mental hyperactivity at the moment, I cannot remember. For a tandem student, the state of mind during freefall is much like that of an infant: raw, disconnected, and only concerned with whatever sensory information it receives; And the goal of skydiving school is to safely nurture that mind into adulthood. For my newborn mind, though, it is difficult to recall exactly what happened on that jump.

Before I knew it, I felt my instructor reach for something. He pulled the alternative pilot, which deployed the main chute. There was still much for him to teach me on the way down, so for the moment, neither of us dwelled on the mishap, and I enjoyed the quiet serenity of parachuting. Immediately after landing, I cut straight to the inevitable: “Does this mean I have to redo my T three?”

“Yeah,” he sighed. What truly irked me was the near-perfection of every aspect of the jump, except for, by far, the most important one: pulling. I still have no idea exactly what happened, but on the official record, I did not pull. My heart sank into frustration, not because I had to pay for a redo, but simply because I failed. A slight embarrassment washed over me as I walked back into the hangar, even though only my instructor and I, not another soul, knew about it. All I could wonder was if anyone in the history of the dropzone had ever failed their third tandem. I questioned whether or not I was cut out for this hobby.

My frustration, however, was soon overcome by resolution. About a minute after landing, I looked into my availability for a redo. A short while later, I shared the story with Lauren from manifest. I said I felt embarrassed, like I had failed kindergarten. She assured me that there is nothing to be ashamed of. Skydiving is easy. Learning to skydive is not. That’s what instructors are there for- to correct the students’ mistakes and teach them how to improve it for next time. It was then that I truly realized how much I want my skydiving license.

Three days later: the rematch. When my new instructor learned that this was my second attempt and asked what happened on the first, I started: “Well, it’s kind of awkward,” which made him laugh. I told him the story, and prodded him for every strategy to assure that it doesn’t happen again. His advice was simple (and familiar): don’t overthink it (which I had been), and take more time on the practice touches. So, up we went, out we jumped, and down we fell. During the practice touches, the elapsed time that I held onto the ball which deploys the parachute must have been a gluttonous ten to fifteen seconds, out of a sixty second freefall. My turns were good, and it came time to pull. I reached back, grabbed with more certainty and urgency than I ever thought possible with a golf ball, and pulled.

(Sigh of relief). Something happened. I looked up to inspect the parachute, which I had deployed, and for the first time since my tandem one, I actually smiled. A victory “wooo!” may have followed as well. We floated back to Earth, and as I unharnessed, my instructor signed off on a successful T-3 in my logbook.

I was elated. In fact, about an hour later I ended up on another plane to attempt my next student jump: solo skydive number one, but that’s another story for another day.

The Life of a Dropzone Dog Previous Article Black Friday Gift Card Sale 2021! Next Article
Book a Jump(opens in a new tab)